Posted by Roberta Beach at 14:45 2 comments: Links to this post

The Making of a House Beagle

It is cold. Even for a native Minnesotan living in Cape Girardeau, it is cold. My outside taps are just open to prevent freezing; the new metal roof shines on the breezeway and garage (no more hole in the roof). The dogs, including Monk the Feral - NOT, are in the house more than outside, even in the sunshine.

OK, no snow yet but hopefully on its way

Squishy is a stray Beagle boy who came to Silverwalk Hounds from the Sikeston Area Humane Society. He was shy, wary, tough to photograph. He found "scents" out by the far two trees. We could hear him baying and "hunting" between the two trees for hours. He only has one voice. Most hounds have a bark, talking bark, and a bay. Squishy only bays. He became the Conductor of Hound Song here; when he bays intently, others join in - and I hear a chorus from deep bays by Walter and Sheba to a squeaky bay by Angel, one of the foster Dachshunds. The hound song is amazing - when they stop, it's at the exact same time...how do they do that? 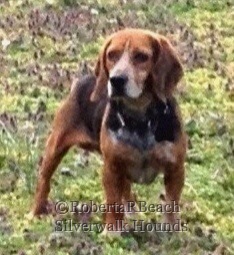 Squishy at distance soon after arrival

Time passed. The Squish relaxed. He let me pick him up and cuddle him but would not stay on my lap - no sirree. He was heart worm positive and treated without complication but with a noisy stay in his crate - "I'm an outside dog; not one to be cooped up. ARROOO!"

And then he wasn't. My friend Cheryl was here one day and said, "What does Squishy want?" as he bayed his bay outside. Without looking at him, I said, "He's hunting." "No," replied Cheryl, "he's not." She was right. The Squish was sitting on the front lawn, looking at the front door, BAYING to come IN. 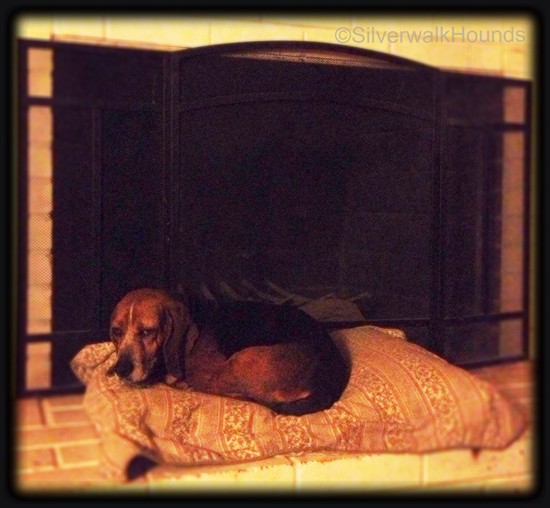 For some time, he'd been greeting me by flying to me from his trees, ears flapping out in the wind like Dumbo's, a smile! on his face, a bounce in his step. He'd bump my leg and wait to be petted and loved on, then go play, or not, with other dogs. Now, he didn't bay only in the hunt, he bayed to come in with his mom.

I adopted him. He is my Squish Squish, sporting a green collar and a green peace sign dog tag with Squishy Beach as his name. Whenever he is separated from me for too long (his reckoning), he bays - and I let him in or out. 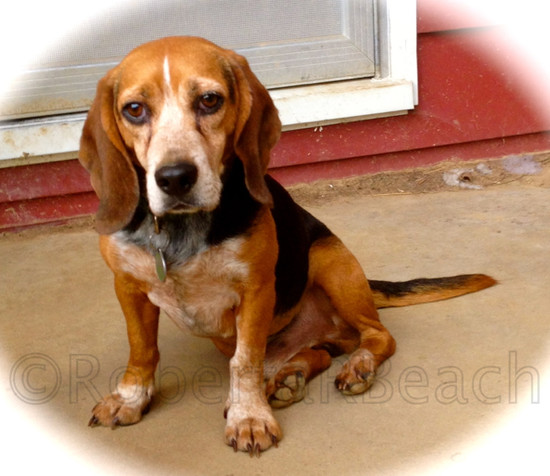 A happy, relaxed Squishy - I have yet to capture his JOY on film :)
Posted by Roberta Beach at 10:17 4 comments: Links to this post

When you let Dachshunds lay on your lap while you work, read, surf the computer, they will inevitably fart,

And, no matter the size of the Doxie,

The smell is noxious & pervasive.

Just felt the need to share my olfactory pain.

Have a GREAT weekend!

Posted by Roberta Beach at 21:44 4 comments: Links to this post